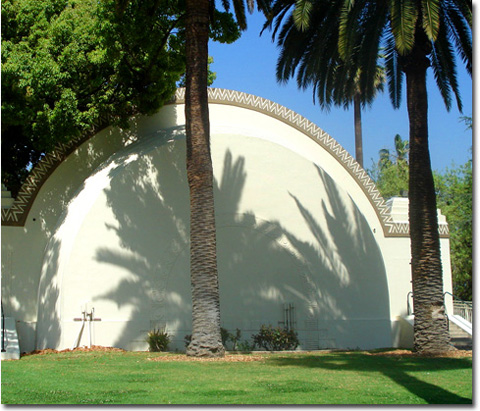 One of the things I love about Pasadena is the intelligence, creativity and fun-loving nature of the trees. These palm trees behind Pasadena’s Gold Shell in Memorial Park are doing a good job of making shadow shapes that definitely look like . . . well, trees. No, wait, I see it now! There’s both a front and a side view of a tribal headdress . . . or maybe a couple of turkeys or slightly battered peacocks.

The metro’s gold line has a station here at Memorial Park, which is very convenient for my daughter, who gets off at this station to get to her down town cheer practice. (Victory Cheer Company)

“The Levitt Pavilion for the Performing Arts in Memorial Park sits in the hub of Pasadena, truly in the center of the City of Pasadena’s diverse neighborhoods and cultures.

Once the home of the Pasadena Public Library, Memorial Park was one of the first two properties purchased by the City for public open space. The 6-acre property was sold to the City of Pasadena for the public library, which opened in 1890.

With the relocation of the Library to its current home on Walnut, Library Park was renamed Memorial Park in 1927. One of the acclaimed park activities during that time was the Sunday afternoon concert series. As attendance for the concerts grew, the Gold Shell was built in 1930.

In 2003, the City of Pasadena approved a partnership with The Friends of the Levitt Pavilion, which included a donation from the Mortimer Levitt Foundation of $250,000 to refurbish the Gold Shell and $500,000 over a 5-year period for performances at the newly refurbished venue. In the summer of 2003, The Friends of the Levitt Pavilion-Pasadena produced its first summer concert series, under the stars, in the beautifully restored Memorial Park, for a return to strolling through gardens, picnicking, and listening to music.” 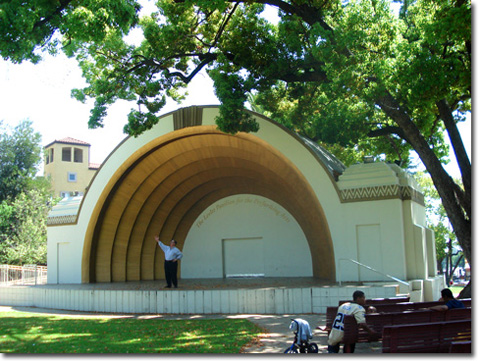 My favorite event at the shell was when Puccini visited last Fall. I had always wanted to hear him live, and the performance was amazing. They must have forgotten to send out the email flyers beforehand, though, because the crowd was rather small.

This can work to your advantage, however. There’s nothing more intimate than a private concert by your favorite Italian opera singer. Tell me, what other city offers you this? Buy in Pasadena if you have any culture at all.