So, it feels really enlightened to have bought a car that can run on vegetable oil from the Japanese restaurant down the street, but there are some interesting quirks to the thing . . . it’s like having another member of the family with its own unique personality traits, and idiosyncrasies that you just kinda hafta work around. 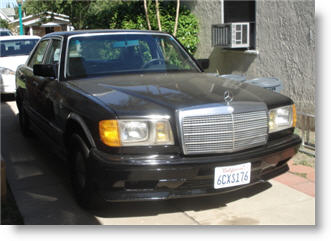 One of the most endearing is the flashing headlight phenomenon.

It’s better than being in a parade. The flashing headlights have a way of making you feel like you’re saying to the world, “Hey, look at me! I’m something special, not to be missed!”

So you drive around town sheepishly trying to dodge the unwanted attention, pretending that nothing’s happening. There’s something funky with the “alarm” system. Thankfully, the horn has been disconnected, or it would be going off incessantly as well. The weird thing is that the lights continue to flash long after the car has been turned off . . . hmphf.

So that’s what you get for driving around an older car . . . a 1985 Mercedes 300D. This diesel engine doesn’t need a conversion kit to be able to run on regular old vegetable oil, we just have to filter it a little so we don’t get chunks of tempura stuck in the internal parts somewhere.

But hey, at $4.50 a gallon and rising, I’m glad to have a cheaper fuel alternative, and I’ll probably get another one for my teenagers to drive around. As well as having green, cheap fuel options, they’re built out of solid steel, and would be a safer bet for my newbie teen drivers that sometimes scare the hell out of me.